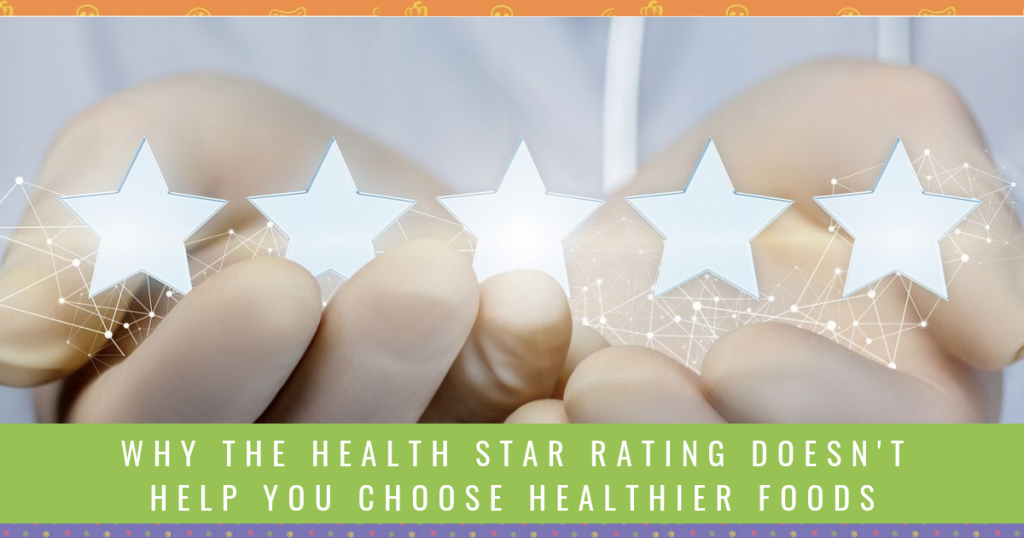 Have you looked at the Health Star Rating or other claims on the front of food products when it comes to choosing healthier options? You’re not alone. Unfortunately, many of these can be misleading.

Food manufacturers do everything they can to make food appear healthier than it actually is. They know many of us are time-poor, so they use a variety of marketing tactics to convince us that their products are a good choice.

Learning how to read food labels and cut through the marketing claims is an important life skill for any parent. By understanding what to ignore and what to look for, you can start making healthier choices for the whole family.

Watch the video below or keep reading to learn about the Health Star Rating and how to interpret food labels.

What is the Health Star Rating?

The Health Star Rating system was developed by the Australian government. It is intended to show shoppers how healthy a food product is at a glance. The star rating ranges from a 1/2 star up to a 5-star rating, with 5 stars being a very healthy choice.

How does the Health Star Rating rank food products? It looks at 4 main nutritional factors that the government believes are bad for health:

The more of each of these nutrients found in a food, the lower the star rating will be. Some beneficial ingredients can also improve a rating, including fruit and vegetable content, protein and fibre.

This system is designed so that you can buy a high-star rated food with confidence that it is healthy. But it is not as good an indicator as you might think.

Why the Health Star Rating is flawed

There are a few reasons why this approach to food products can be problematic.

When you look at specific nutrients and compounds in isolation, it can be easy to misinterpret how healthy a specific food really is. Each of the ‘detrimental’ nutrients are only one component of the food.

For example, butter is a natural food that comes straight from a cow. But because it’s high in saturated fat, it has a lower score than a highly processed margarine.

Plain milk has a rating of 4 stars, but Up&Go has 4.5 stars, despite having added sugars and additives. Low-fat strawberry milk also gets 4.5 stars. Does this mean that flavoured and processed milk drinks are healthier than plain milk? Not at all!

This can happen across different food product types. Some lollies are rated higher than natural Greek yoghurt. Lollies are high in sugar, but low in saturated fat. Greek yoghurt is a source of saturated fat, so sometimes it will rank as less healthy.

You’ll also see this with oils. Canola oil, which is high in inflammatory omega-6 fatty acids and is processed ranks higher than olive oil and coconut oil.

As you can see, wholefood and unprocessed options often lose out because of how the ranking system works.

Food manufacturers can tweak their score by adding ingredients

Foods will get a better ranking thanks to fibre and protein. So often, manufacturers who are trying to make their products look ‘healthy’ will add ingredients to influence their score.

One example of this is Nutri-Grain. This cereal is highly processed and full of sugar, but receives a 4-star ranking because they have added fibre. Added fibre doesn’t negate the processing, sugar and additives it contains.

Other products may contain added protein – this is common for yoghurts and muesli bars. The manufacturers will add processed milk powder or other protein powder to boost the protein levels and the star rating.

Milo recently faced controversy for tweaking their rating. They received a 4.5-star rating because the serving suggestion had skim milk and a tiny serve of Milo. But without the milk, the product should have received just 1.5 stars. Milo opted to remove their star rating altogether.

It’s not mandatory to have a rating on food products

It’s up to the manufacturers whether they want to include a rating on their products. That’s why you won’t find many products with 1/2 or 1-star rating – they’ve opted out of the system.

There has been a recent review of the system, with a push to consider looking at added sugars rather than total sugars. But even with the reviews, there are still many issues with how the Health Star Rating system works. 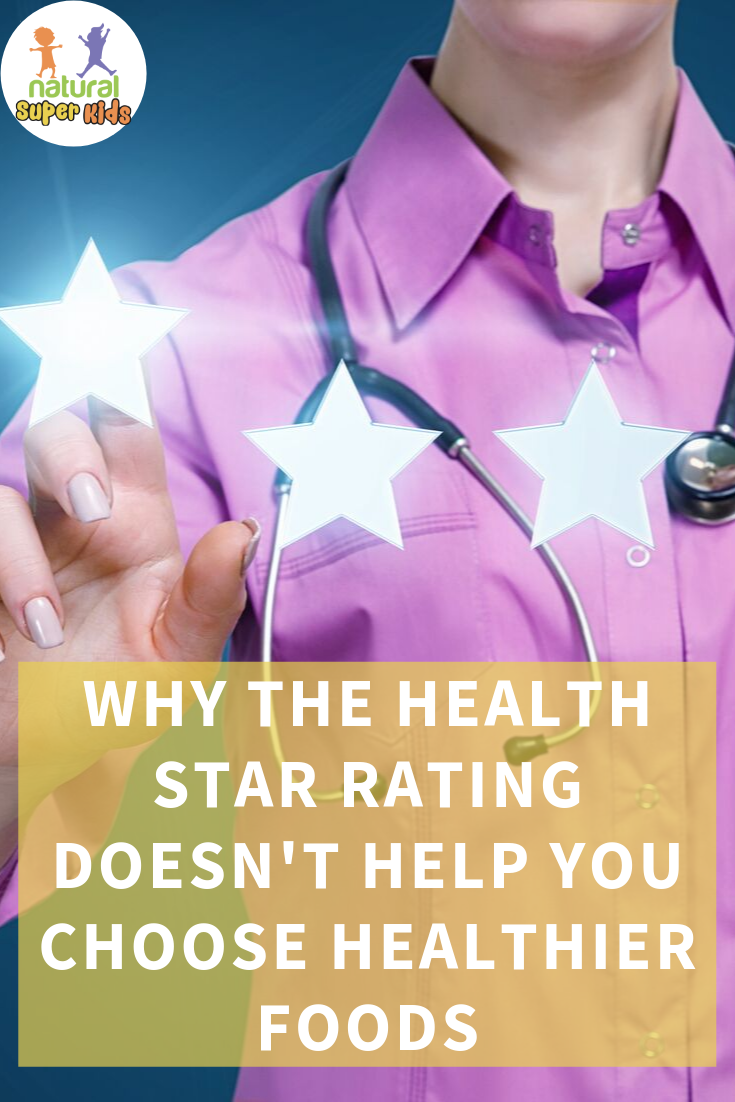 Other food labelling tricks to watch out for

There are other labels and claims to ignore when it comes to making food choices for your family. A good rule of thumb is to ignore any claims on the front of the packaging. Let’s look at some specific claims you might come across.

We often think that this is a good choice, because our kids need to eat less sugar or less sodium. But when you look closely, these claims are not what they seem.

For example, a tomato sauce claims it has 25% less added salt than the same brand’s regular tomato sauce. But the regular sauce was much higher in salt than many other brands, so the reduced salt option was not necessarily healthier than others.

Many chip packets boast 75% less saturated fat compared to chips that are cooked in palm oil. But the reduced saturated fat chips are typically cooked in vegetable oil. Vegetable oils are high in omega-6 fatty acids and are inflammatory, so they are hardly the healthier choice!

You’ll often see claims like ‘no added sugar’ on flavoured yoghurts, lollies and soft drinks. But what are they replacing the sugar with?

This a claim you’ll often see with products such as breakfast cereals. They might claim to be high in protein, fibre, B vitamins or antioxidants. It might also say they are enriched with a nutrient.

Many of the micronutrients added to foods are synthetic and not easily absorbed. It also does not mean that the product doesn’t contain large amounts of sugar, additives and other unhealthy ingredients.

A gluten-free diet can be beneficial for many kids, including those with allergies, intolerances, behavioural issues and those on the spectrum.

Instead, stick to wholefood-based gluten-free options, such as buckwheat, quinoa and rice.

You’ll see ticks on many food packages. The ticks might have some of the previous claims on them, or other claims such as ‘source of wholegrains’. Ticks are seen as positive, and are designed to draw us in and think it’s healthy. But this is just a clever marketing tactic.

Other claims can be irrelevant or pointless. Studies show that claims do affect our buying behaviour, and manufacturers take advantage of that.

For example, cheese might claim to be ‘100% natural’, even though most cheeses are. You might also see that lollies claim to be 99% fat-free, which is also true across the board. But 99% fat-free doesn’t make them healthy.

Brands will often incorporate words such as ‘natural’ into their names. ‘Natural’ doesn’t mean anything in terms of health benefits, but entire brands are developed around this term to make them appear to be the healthier choice.

If the health star rating won’t help me to pick healthy choices, what can I do instead?

This is basic, but effective. But how can you include more wholefoods when it comes to shopping?

The first step is to avoid supermarkets whenever possible. When you go there, you get sucked into the specials and packaging that is plastered everywhere. Whenever possible, shop at alternatives such as farmers markets, butchers and produce stores.

If the supermarket is the only available option, stick to the perimeter of the store. This is where you’ll find most of the wholefoods – fruit, vegetables, dairy and meat. Once you have your basics, go down specific aisles to get what you need.

The most useful information is on the ingredient list. It’s usually the smallest because manufacturers prefer you to look at the claims rather than the ingredients.

Avoid any ingredients that sound like chemicals, and avoid lists with multiple numbers. Numbers are additives that either prolong the life of the product or make it look and taste better. Some are ok, but many are unhealthy. To learn more about additives, make sure you check out our previous article.

This is particularly important for treats and cereals. The packet might say a cereal only has one teaspoon of sugar per serving. But often a serving is as little as 30g – most people will eat 3-4 times that.

Check the size and how many are contained in each package to see if they are significant smaller than you might think.

Learning how to read food labels and what to ignore is important. But as parents, we can reduce the need for reading labels by incorporating more wholefoods into our family’s diet. Find out how with our free Wholefoods For Kids ebook here. 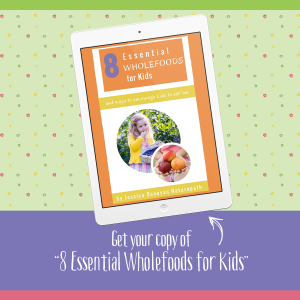 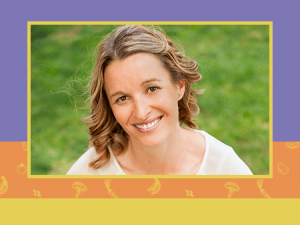 Did you guess the answer? 🤣

I've felt a big shift recently, moving into being

Want to manage your child’s fever without using

Are you struggling to get to the bottom of any of